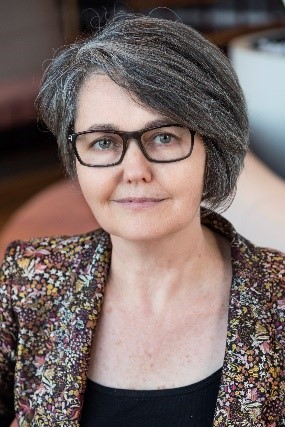 The end of a financial year is often a time to reflect on the past 12 months on the work front.

The 1074 complaints received by the OIA represented a four per cent increase on the previous 12 months.

This increase was not unexpected given 2020-21 was the first full year with all 77 Queensland councils under the councillor conduct framework. However, the size of the increase indicates that complaint numbers are starting to stabilise.

While the local government sector lodged 53 per cent of complaints this result was affected by a high number of notifications about a single issue  from one council. It also reflects the mandatory reporting obligations on local government officials under sections 150P and 150R of the Local Government Act 2009.

As such officials must notify the OIA should they become aware of information indicating a councillor may have engaged in inappropriate conduct or misconduct. They are also required to refer to the OIA any complaints they receive about a councillor's conduct.

Encouragingly this outcome for the sector included an increased number of self-referrals with 30 councillors reporting themselves to the OIA, up from 11 in the previous year, and five in 2018-19.

I am pleased to report that the initiatives introduced by the OIA in September 2020 to assist councils to deal with inappropriate conduct objectively and fairly appear to be having a positive impact.

An increased number of allegations were finalised in 2020-21, which is an important outcome. Effectively dealing with lower-level matters, such as inappropriate conduct, helps to prevent an escalation in conduct to more serious levels.

A continued focus on improving the fairness and consistency of decision-making in this space remains a priority.

In the immediate future we will be extending our most recent initiative –a six-month ‘telephone trial’ which allows councillors in First Nations areas to phone in their initial responses to an inappropriate conduct allegation, rather than replying in writing.

It was designed to help councillors overcome some of the difficulties in reliably accessing the internet or devices in what are often remote communities.

The initiative has been well received, having considerably improved the capacity of First Nations councillors to have their say as well as the timeliness of assessing such matters. It was originally due to end on 1 September but will continue at least until the end of 2021.

The OIA remains committed to working positively and constructively with the state’s 77 local governments, which can face very different operating environments and circumstances.

On 28 July 2021, the Deputy Premier Steven Miles announced $1.302 in funding over two years to help the OIA undertake its work.

In 2021-22, and as complaint numbers continue to stabilise, the OIA will be directing its energies into improving the timeliness of investigations and, where appropriate, referrals to the CCT.

As always, I welcome any feedback you may have,

* Figures are recorded from 1 July 2020 to 30 June 2021.
** The OIA received a small number of complaints that were general in nature (for example they did not relate to a specific councillor).
*** An additional 12 complaints were referred to the CCC in 2020-21, however these were received in the preceding year.

In the 2020-21 financial year, the local government sector was the main source of complaints however, this result was affected by a high number of notifications from one council regarding a single issue in the second quarter.

It also included 30 self-referrals by councillors. 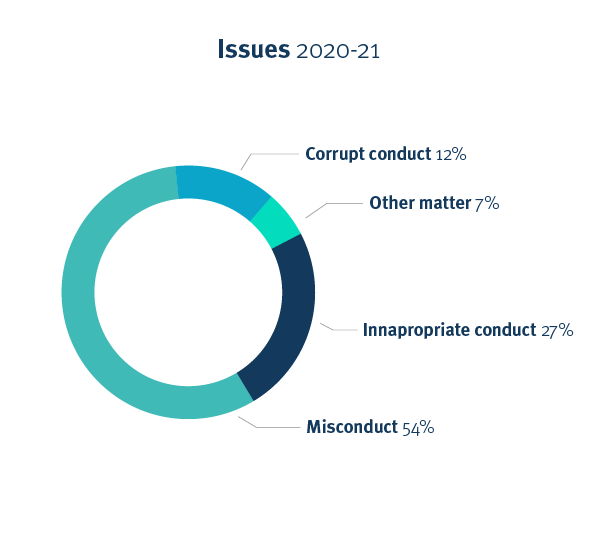 *CCC refers to the Crime and Corruption Commission.

The following graph shows the number of complaints received about the conduct of councillors in South East Queensland from 1 July 2020 – 30 June 2021.

The graph below shows the complaints received about the conduct of councillors in regional Queensland from 1 July 2020 – 30 June 2021.

See the list of councils in each region here (PDF, 150KB).

* One investigation involved 106 complaints about a single issue.
** Some of the finalised and active investigations commenced prior to the 2020-21 year. *Brisbane City Council came under the OIA’s jurisdiction on 30 March 2020. All other Queensland councils came within the OIA’s remit on 3 December 2018.

The following graph provides the same data as above in relation to regional Queensland councils. * 106 complaints received in relation to one issue at a council in the Torres and Western Cape region were dealt with in one investigation.

Referring misconduct allegations to the CCT

This year in Insight we have been detailing the various stages of the complaints management process.

So far we have looked at assessments and investigations – this time we examine what happens when a complaint is referred to the Councillor Conduct Tribunal (CCT).

The purpose of misconduct proceedings

It is important to understand that a referral to the CCT is a disciplinary process, not a criminal one.

The purpose of a disciplinary processes is not to punish but, in the context of councillor conduct, to ensure compliance with the standards of conduct set out in the Local Government Act 2009, to promote future compliance, and to uphold confidence in the integrity of councillors.

Essentially the referral process begins when an OIA investigation raises a reasonable satisfaction that the subject councillor has engaged in misconduct.

At this point the OIA legal team undertakes a natural justice process, issuing what’s known as a section 150AA notice. This provides the subject councillor with a statement of facts that sets out the allegation/s, the particulars, and the facts that have been gathered as part of the investigation to support the allegation/s. The statement of facts also clearly sets out how the alleged conduct may constitute misconduct.

Any submission by the councillor or their legal representative in response to the 150AA notice must be considered by the Independent Assessor (IA).

Following this consideration, a decision may be made to refer the matter to the CCT, or to do so with amendments (for example by removing allegations for which a reasonable satisfaction of misconduct no longer exists). Alternatively, the IA may decide to dismiss the matter or take no further action at that time.

When does a referral to the tribunal occur?

To determine the prospects of an application being sustained, the IA considers:

To determine the public interest in an application the IA considers a range of factors, including:

Some of the factors taken into account by IA include whether it is in the public interest to refer the matter to the CCT, and whether there are reasonable prospects of the allegation/s being sustained .

In determining the public interest the IA will also consider whether the matter raises an important or unique point which would benefit from a CCT decision to provide guidance to other councillors in like circumstances.

If the IA ultimately decides to progress the matter the application to the CCT will include:

What happens after a matter is referred to the tribunal?

After an application is made by the IA, the CCT may either issue directions to the parties or list the application for an initial case management directions hearing, should this be required to determine and manage any preliminary issues so the matter can progress.

You’ll find more details about the processes outlined above in the CCT’s practice directions.

Both parties are expected to comply with all CCT directions, but either side may request an extension if it can’t meet a deadline.

At any time, either party may lodge a written request for a directions hearing and explain why it is needed. However, the CCT expects that the parties confer in good faith prior to making these requests to limit the need for its intervention.

Most misconduct hearings are conducted on the papers. However, an oral hearing may be held if either party requests it, and if the CCT is satisfied that the circumstances require it. The subject councillor may also ask to have a legal representative present, although the CCT can decline this request.

The OIA bears the onus of proof as the prosecutor and the standard of proof that applies is the civil not the criminal standard i.e., whether misconduct is made out on the balance of probabilities per the principles in Briginshaw v Briginshaw (1938) 60 CLR 336.

When making submissions on possible orders the IA will consider

Both the IA and the councillor may make submissions on the appropriate order should the misconduct be made out.

A determination on whether the councillor has engaged in misconduct will not be delivered on the hearing day. However, once made, a notice of the CCT decision is provided to the OIA, the subject councillor, the relevant council, and where possible, the complainant.

A case summary is then published on the Department of State Development, Infrastructure, Local Government and Planning website, although some details may be redacted to protect the complainant, witnesses, or confidential information. The subject councillor will only be identified in the summary if the allegation was sustained or if they consent to being named.

The outcome must also be published by the relevant council in the Councillor Conduct Register on its website.

All parties may review a CCT decision  to the Queensland Civil and Administrative Tribunal (QCAT).